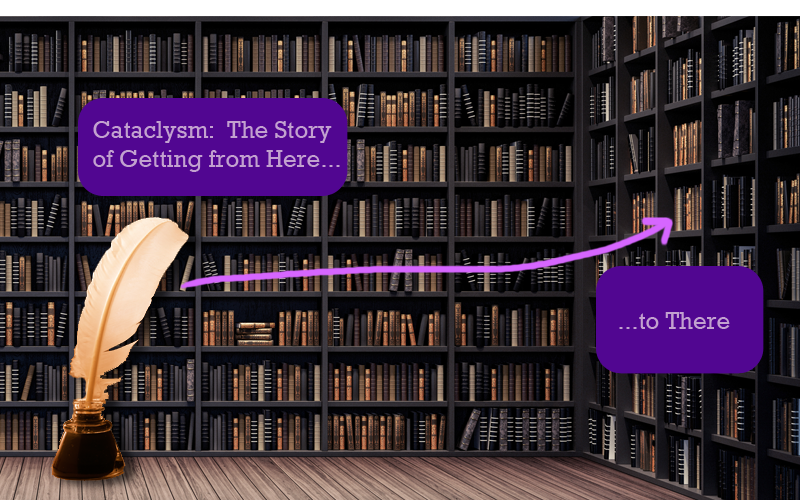 Writing for me truly started 15 years ago. I’ll not bore you with the infinite details from yon to now. It did, however, begin with a nightmare, one that ultimately proved to be all-important to the existence of the 11:34 saga. I awoke, not in fright but awe. I could have rolled back over and returned to my restless sleep. I could have, and none of this would be a reality today. Instead, I spent the next three hours writing the outline that would be the basis of the series.

I am a believer in education but a firm one. While I am not a big believer in the greedism that has become sports-led universities, I find technical and small schools perfectly adequate. If you wish to spend a hundred thousand dollars or more on a Masters of Fine Arts, then that is your prerogative. Just be prepared to scout low-paying jobs doing something that inspired you to pursue your advanced degree. Less than 2% of authors make $100,000 per year, so be prepared to break out the Ramen noodles for your three squares a day. I attended technical schools and workshops, earned an Arts degree, and smoothed some of those rough edges without putting myself in perpetual debt. I believed in me, chased after a few dreams simultaneously, and never quit on myself. It cost nary a penny to study on my own time, to research, to pick up new skills, and build upon existing ones.

Research. Reading, Books. Internet. There are some consistent bits of advice you should heed. Spend equal time reading as you do writing. Read books written by a variety of authors (successful and not so well known) in the genre of your choosing. Build your voice and writing style by authoring a million words.

I placed 11:34 on the backburner to write a 360-page novel in the fantasy genre. I wrote several short stories, many of which I entered into writing contests. I rewrote that fantasy novel eleven times. I began writing the Test of Mettle stories, some of which are present in Cataclysm.

I attended GWW classes, writing yet more compositions, essays, and short stories. I read other students’ stories and critiqued them. With my skills drastically improved, I revisited my work with a different set of eyes. Those eyes despised the writing from my fantasy novel, though I still find the story to be very appealing – one that I plan to revisit at a later date. I continued to write and read from the masters. I attended Master Classes. David Baldacci, James Patterson, Dan Brown, Margaret Atwood. I read. I watched. I wrote. Always moving forward. Always looking to improve.

I hear so many authors tell tale of people who tell them they are thinking of writing a book. I, too, have heard this expressed to me. If you seek sage advice, well, here it is: it's like anything in life: if you are serious about it, then you will make time and you will get it done. It's not easy. It's not guaranteed to make you rich. It's about passion and seeing that dream to fruition.

After I wrote the first draft to Cataclysm, I printed the manuscript at a local office supply store. Then, with the help of my wife, we read and marked up the manuscript. I applied changes after each day’s reading until we finished. It took about two or three weeks. I purchased poster paper at the same store along with sticky notes and developed the storyline for the first three books of the series.

The manuscript saw dozens of changes for a few years. I was never quite satisfied with it.

In 2017, I completed the first major edit of the novel and moved to copyright my work in 2018. I had been working on it for a dozen years to that point, so it seemed to be the prudent course of action.

In 2018, I started on the sequel after a second major rewrite of Cataclysm. In December 2018, I began peddling the novel to over forty agents. By June 2019, I received no hits and about a dozen rejections.

Between the cracks of time, I managed to rebuild my website a few times and produce a pair of book trailers for the first novel.

Dissatisfied with the lack of enthusiasm displayed by the agents, I decided on another tactic. I researched several companies inquiring about services they provided, the cost of those services, and what real writers said about them. I settled on Write by Night in New York, paying them to professionally critique the manuscript.

By the end of June 2019, I had grown very ill. The illness lasted eight months. My life was put on hold. Cataclysm would have to wait until I became well again.

By late April 2020, with the information received from the critique, I tackled the third major rewrite with renewed enthusiasm.

In August, with my wife’s blessing and a life dream remarkably near the finish line, we paid Write by Night to professionally proof and edit the manuscript. Have you ever read a novel, particularly an e-book, chock full of mistakes? Anyone committed to authoring should consider accomplishing these tasks.

In September, after minor tweaking, the first novel in the 11:34 series was ready for publication. With help from my friends in New York, we peddled the manuscript to more than three dozen agents and publishers.

While the hope is for someone (agent or publisher) to pick this up in the coming weeks, the novel is ready for e-publication should that fall through.