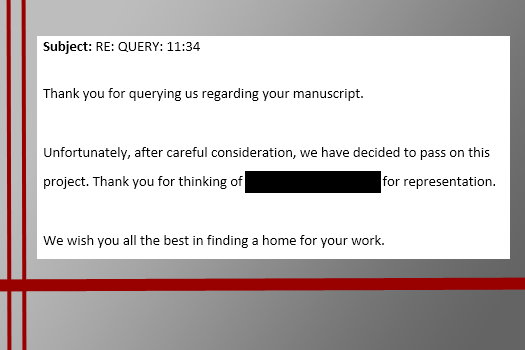 Plenty of writers receive rejection letters. Rejection is a ubiquitous part of the craft. It is a reminder that someone, somewhere, is not interested in your work despite your best effort to make it shine. And that is fine. It's like the motto spoken on Ghost Hunters: "Onto the next." Rejection may be an unwanted part of the job, but it is not unexpected. It comes with the territory. How you cope with rejection is the mettle of your character. Some wept. Some went on unprecedented junk food eating binges. One remarked about how she could redecorate one of her rooms by using the bottomless stack of rejection letters she had as some kind of acerbic wallpaper.

Not me. No way. Others, like me, use it as a poker to stoke the fire. I don't give up too easily.

Plus, let's be honest. It's my first rejection. There are undoubtedly many more to come, but I'm celebrating my first. Someone, somewhere, took the time to read my material - at least enough of it to say no thanks.

Some time ago, I read that you don't really become a writer until you receive your first rejection letter. Whether or not that's true, I kind of dig the thought that there is an actual, tangential measurement of authenticity. Heck, I may not be a great writer, but I am a writer nevertheless. It is sort of like be called up by the Major Leagues. You ride the bench for a while until the manager calls your name to go in to pinch-hit. Instead of parking the ball in the bleachers, you strike out. That's how I'm accepting this. I struck out, sure, but I did so wearing the uniform. Yesiree, I'm celebrating my first rejection with a cocktail in hand! I haven't won the World Series, but, for me in the now, it feels like I did.